Ad Rank Tips – How to Lower Your CPC in Google

Ad rank is the value that determines your ad position on a search engine results page.

Your ad rank consists of how much you are willing to bid, the components of quality score and the impact of ad extensions and formats.

What advertisers need to keep in mind is that Google users want to see ads that are relevant to their search query, they don’t want to be bother with ads that aren’t closely related to what they’re searching for.

Here is a scenario of a traditional auction between 4 advertisers: 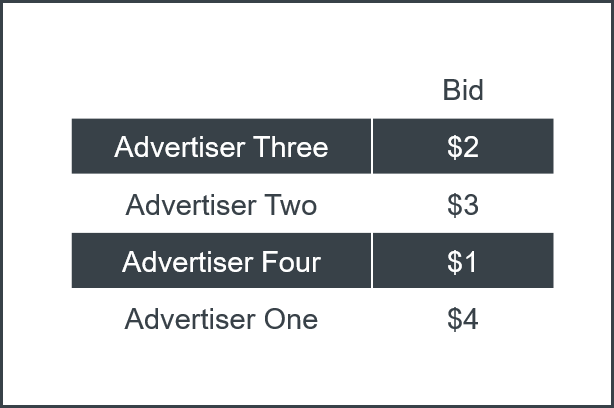 We see how much each advertiser is willing to bid. In a tradition auction, advertiser 1 would get top position based on their bid amount.

Google’s Auction and Your Ad Rank

Google uses a variation of second price auction – which means an advertiser does not have to pay their full bid, just enough to beat their competition.

Google’s variation of second price bidding – which combines the use ad rank – means the position where your ad is shown isn’t only based on bid, but also on how relevant your ad is to a Google user.

Here is a similar scenario – but this time we are using Google’s variation of second price auction – which includes ad rank:

Advertiser 3 won the auction because they have maximized the components of ad rank, and at the same time generated a lower CPC giving more value top their spend.

In Google’s auction, it pays off to put the time and research in and maximize ad rank. It could end up saving advertisers some serious coin all while driving quality traffic to your landing pages.

Jon is an avid digital marketer. You can connect with him at @JonKaspszak