You’ve probably come across some fantastic aerial shots on the internet. Most likely they were captured through drones. And with that said, it’s understandable that you might be tempted to get a drone yourself.

After all, who wouldn’t be? These amazing gadgets are cost-effective, fast and fun. That’s why manufacturers are competing aggressively to get a share of the photography drone market. But with so many options, how do you choose? Is it the quality of photos, ease of use, or the cost of the drone?

That’s why we’ve compiled a review of the top drones in the market today. 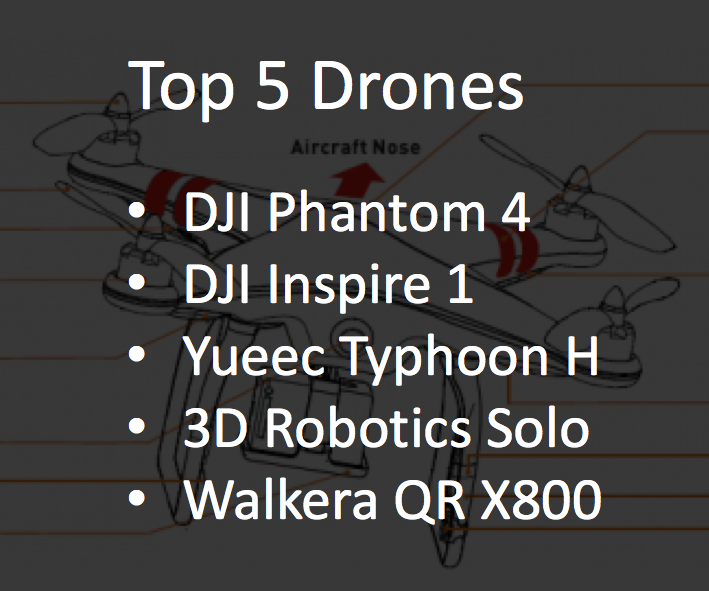 This is an expensive drone but definitely worth it. If you’ve flown quad drones before, you’re sure to enjoy this badboy. It’s ready to fly and should give you no trouble. It has an excellent camera, slow motion video, obstacle tracking and avoidance.
The only downside to this model is that the obstacle sensing system has limitations – it can only sense things right in front of it. Extra batteries are expensive and it’s not travel friendly – as the landing gear is attached to the body, it a bit cumbersome to carry around. Learn more about DJI Phantom 4.

The Inspire is expensive and usually used for professional shooting. It is very easy to fly and uses its camera and sonar tech to stay stable. It’s heavier, as it’s made of carbon fiber and metal. This makes it harder to carry around. But it also makes it more durable and less likely to damage. It has an fantastic camera with 4K resolution at 24, 25 or 30 frames per second. It uses a 3-axis gimbal to keep the shots steady and the camera can rotate 360 degrees. But best of all, it supports multi-user control. One person can control the camera while another controls the aircraft. The drawback is the battery life and spare batteries are expensive. Learn more about the DJI Inspire 1.

It’s priced evenly with the DJI Phantom 4 – so in other words, it’s not cheap. But what sets it apart is that it’s a hexacopter. It has six rotors instead of the usual 4 on quadcopters. Typhoon H has a nice 4K video camera and an option for a second controller to be added. The camera is mounted on a 3-axis gimbal, which allows for a rotation of 360 degree. It also has retractable landing gear, sonar tech for object avoidance and autonomous flight ability. On the downside, the Typhoon H is a not very sturdy and the recharge time for the battery is very long. Learn more about the Yueec Typhoon H.

The 3D Robotics Solo with gimbal is a GoPro-powered drone geared toward video capture. It also has several automated camera moves. Its attractive design makes it simple to control and fly. The Solo is built for autonomous flying – meaning you can set the drone to Orbit. So, put the control away and relax, while it films you in the background. Like most drones in the market, the battery takes a long time for charging and extra batteries are expensive. Learn more about the 3D Robotics Solo.

The Walkera QR X800 is a great quadcopter design that uses the power of photography and videography. It has a retractable landing gear feature and a design to make the extensions like a foldable “umbrella”. This makes it more portable and why it’s called a “folding quadcopter”. This quadcopter has a heavy payload lifting capacity, so it’s not a problem to put on the typical DSLR. It has a learning curve, so it takes a time to learn to fly this quadcopter especially the advanced controller and the landing gear. Learn more about the Walkera QR X800.

When it’s all said, and done

We covered a few drones in our review. We looked at a few factors, including quality of the photos, ease of use and cost. There are no real winners, because each perform better based on different scenarios. Depending on your needs, there’s a good drone for you to choose from.